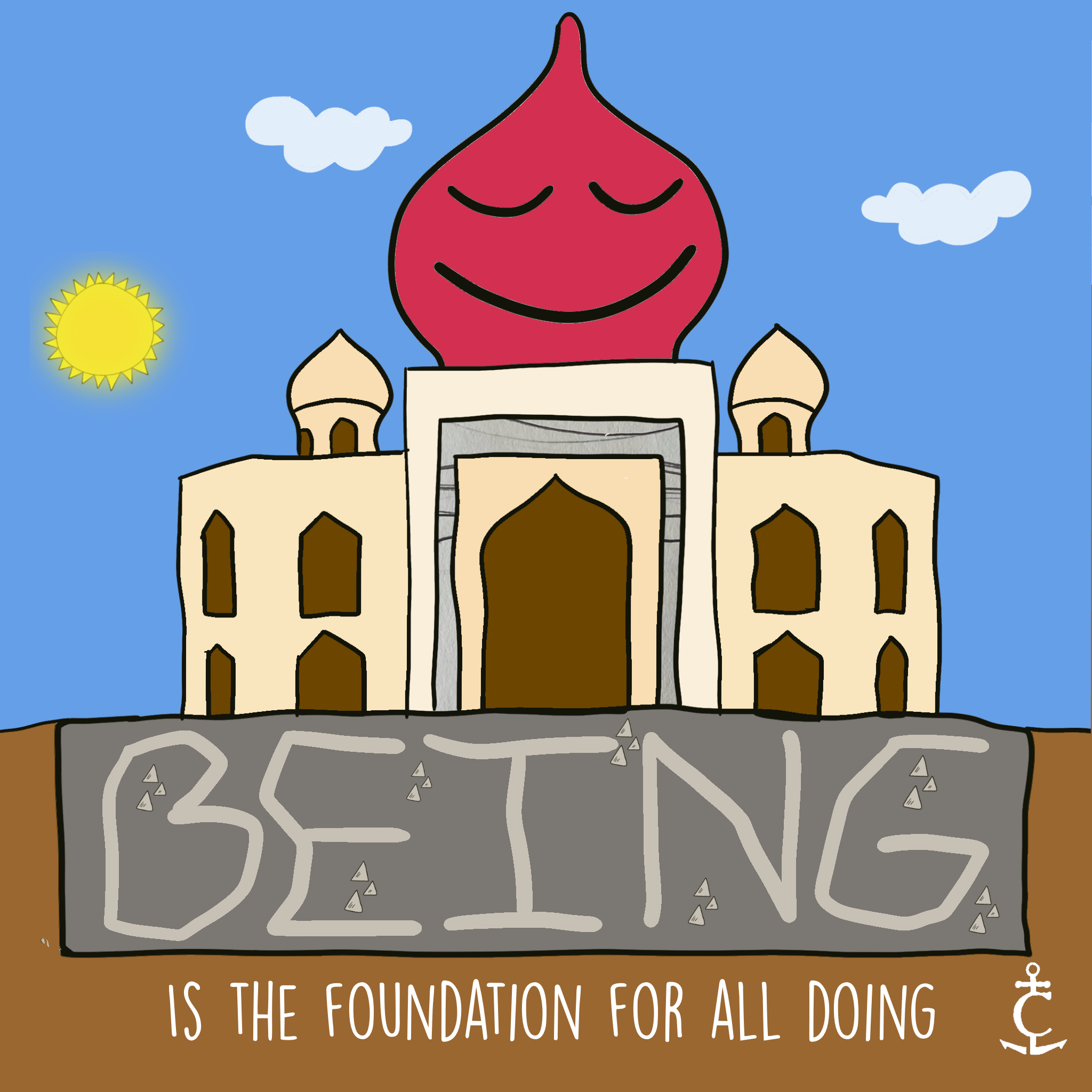 Maybe I’m beating a dead horse here. Being too obtuse. Too vague. Contradictory even. Sure, it’s paradoxical and it sure as shit ain’t logical. This is why we have such a difficult time really understanding the draw of mindfulness-based practices that propound the importance of BEING over DOING. Make no mistake about it, these two are out of whack and in a big big way. So what is the big deal? What can we DO about it already!? Well, herein lies the mistake.

‘First BE then Do’

That is what they say. Reprioritise our priorities. Switch them up a smidgen. Right now it’s all ‘Have, then Do, then Be’ when maybe it should be a bit more like ‘BE, then DO, then HAVE’.

I heard a guy once say ‘ how you do anything is how you do everything ‘. It struck me. I felt it but could never quite find the words to articulate what he was saying. Well now I do and it’s very simple… too simple in fact, that is the problem. It’s too simple for a strong-willed left brain to really grok, let alone accept. Why? because it’s too keen to get stuck in and get to the business of doing something about it.

So what is being said by this old maxim? It is simply saying that our way of being bleeds into everything we do, infusing the action with those qualities. Whether we are washing the dishes or painting a picture, the essence of our state of being will flow into that activity. Of course, this is not to say there will be permutations of this essence. The quality of being poured into something you love doing vs something you dislike will vary a bit, maybe even a lot. But the essential quality of your state of being will not.

Have you ever tried to cut vegetables in a rush, or unconsciously. I have but I’ve now cut my finger, once too many to know I need to be present while doing so. This is a bit like that. Life is reminding us to BE first, otherwise, we might be left without a finger someday. Of course, if every situation in life required such a presence, I’d be finished by now. Being present was not my forte, but it is certainly growing on me, but not without effort.

What interests me, in particular, is how some people can have a strong grounded presence about themselves and others (the majority of us) just don’t seem to have.

This would suggest that we all have a default way of being or ‘baseline’. A foundation on which everything we do is affected. Some say this baseline level of consciousness (aka our state of being) is well defined and so takes a powerful effort or life event to shift it. Seeing that this is The Captain’s Log, a map would surely come in handy here, right? Well, it’s our lucky day.

The Map of Consciousness – an introduction

This logarithmic scale of consciousness was created by a renowned spiritual teacher and psychiatrist Dr. David R Hawkins through the use of tens of thousands of ‘calibrations’ using a method known as kinesiology. In short,kinesiology uses a muscle response to determine whether something (pretty much anything) is true or false in nature. The caveat here is that the questions put forward must be carefully crafted in a manner that supports a boolean type response. So how does it work? In simple terms, the muscle of the test subject goes weak for false or it stays strong when true.

The full scope of this methodology goes far beyond this post, but you can check out this audiobook ‘Power Vs Force‘ to dive much much deeper into it. Or if that sounds a little heavy, try ‘The Map Of Consciousness Explained‘. Suffice to say, for now, that the ‘calibrations’ and data collected have been strictly carried out using the scientific method across a variety of cultures, ethnicities and belief systems.

I’ve found this to be an incredibly useful tool for my linear left brain to more deeply understand something that for sure is not linear at all. From my understanding of it, there is a vast scale of consciousness available to a human being. We naturally come with a disposition closely aligned to some baseline on the scale. For instance, it is seen that the baseline of the majority of humanity, as a collective, is under 200 on the scale.

It doesn’t take a rocket scientist to validate this, you can just turn on the news or scroll through social media. Of course, this is not to say that it is uncommon to dip in and out of the various levels on the chart either. I know from experience that there have been plenty of fleeting moments spent in levels at the higher end of the scale and plenty more in the swamps of the lower levels too.

There is plenty to digest in both, but the main takeaway for me is that we have the power to change our baseline. It ain’t going to be easy but the possibility exists. What is really interesting is that 200 marks a significant tipping point. This is the level where we start to break through the barriers of the egoic mind and into the levels of being we all crave deep down. Love, Joy, Peace, and so on.

Everything 200 and below is largely determined by the powerful force of the limited mind-based identity we carry. This deeply rooted sense of individuality keeps us stuck in the swamp of ‘personal reality‘. Only when we being to pop our heads above the water do we see there is so much more to who or what we are. It is like everything 200 and below is the tip of the iceberg and the rest of us is hidden, dormant beneath the surface. I would hasten a guess that 700 and above might equate to the total dissolution of the iceberg altogether and a full merging with the sea of consciousness. I better not get too far ahead of myself on that one, excuse the pun.

What I’ve noticed is this. When you begin to prioritise BEING over DOING you slowly begin to see the necessity and power of it (BEING) more and more deeply. I first came to this urge to prioritise the deepening of BEING years ago but it is only recently I am beginning to really see the importance of it.

It is literally the foundation to everything we do and even more importantly, that ‘foundation’ can be strengthened. I know my foundation was more like sand when I started, it is now slowly becoming more and more stable. I’ll be adding reinforcement next.

What really highlighted the impact of my state of being was the coaching training I was attending recently. How I was in terms of being when coaching a client was everything. You could have the deepest words in the world to say but they would not connect or light up a person if you were not ‘plugged into’ the moment. If you were lost in doing, taking notes, or thinking about what to say next and you would miss what the person in front of you was really saying beyond their words. It was just being in the moment with the person that allowed you to connect with them and your intuition about what it was they really wanted or needed. This is just one example of how being transforms a situation. It’s intangible, but all magic is. I guess that’s the beauty of it.

I don’t know about you but I choose magic every time.

Guess it’s best to keep strengthening the foundation then.

I’d love to hear your thoughts in the comments.